Stronger and More Beautiful in the Broken Places 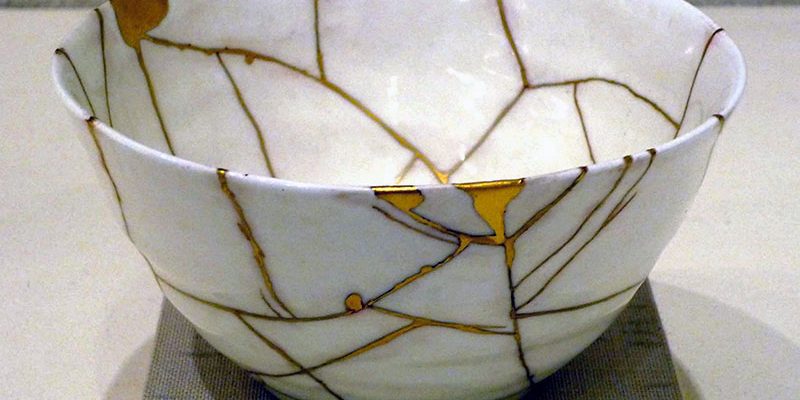 In the Japanese culture it is customary to repair a piece of broken pottery with a lacquer mixed with gold, silver, or platinum, rather than throwing the porcelain container away. This process is known as Kintsugi, “golden joinery”, also known as Kintsukuroi ,”golden repair.”

The broken object, so carefully tended and mended with the golden bond, carries greater value than in its original whole state.

The symbolism and philosophy of this tradition is significant, and views the breakage and repair as integral to the worth of the object rather than treating the break as something to disguise or discard.

The well-used, broken, repaired objects are stronger and more beautiful than before.

What an exquisite metaphor for ourselves and our lives! Per the wisdom in Hemmingway’s poetic and powerful words above, we have all felt broken by our world at particularly low points in life. Yet through these times as we learn to constellate the scattered forces of our will, we can find the ability to be present to those ebbing rhythms and cycles that seem to be intrinsic to every organism that carries life.

My most recent experience of being broken by life occurred in late 2016. My mother died in November of that year, preceded by my beloved uncle in February. I had been appointed as the responsible caretaker for both of these close family members, overseeing their health and material affairs as they concurrently experienced a steady physical and cognitive decline.

The two years of supporting all of their needs while I continued to maintain my full-time professional life took its toll on me physically and emotionally.

So when my mother passed away toward the end of 2016 preceded by my uncle’s passing nine months earlier, it seemed like I would have the time and energy to process all I had been through and fully grieve the loss of these two major players in my life.

But two weeks after my mom was gone, I was walking my dog early one morning, fell and broke my foot. A broken bone is always a trauma to the body but the way in which this accident happened created an overlayer of another kind of trauma. The broken bone resulted from being pulled to the ground and getting caught in the middle of a dogfight after an aggressive dog running loose in the neighborhood attacked my dog and I while walking.

Fast forward to the next several months, a time in which I was highly limited in physical mobility and in varying degrees of pain. This on the tail end of the still unprocessed grief in losing my mother and uncle, I felt broken in body, mind, and spirit.

My usual modus operandi of efficiently facing the tasks at hand, checking off my never-ending lists, feeling productive and efficient at the end of the day came to a screeching halt. Life forced me to slow way down. This left me no choice but to be fully with my experience – not just the physical pain and limitation, but more importantly the psychological-emotional heaviness, spiritual emptiness, and profound weariness of the previous few years.

I resisted this at first, but gradually my prickly will lost its tenacious grip and I found the courage to face all of it. For me this included writing daily in a journal, recounting everything to a trusted professional, contemplative moments throughout my days, accepting and feeling everything that came up. I learned that there was room in myself to feel it all: the anger, the heartbreak, the loneliness, the inertia, the void.

This was not easy and did not feel natural. Yet I persevered and came to realize that my body was not only contracted by the physical pain of the broken bone, but even more powerfully imprisoned by the density of the emotional anguish.

There is a compelling line in the novel Dubliners by James Joyce: “Mr. Duffy lived a short distance from his body.”

During my year of healing, I came to realize the truth of that phrase. Without the ability to race through my days in the typical disembodied ways, with energy and attention imprisoned by my mind, I experienced the reality of what my body had been carrying those past years.

I learned that sadness, grief, anger, and all aspects of despair existed in the cell tissue of my body. In my limited mobility and with no alternative but to feel all of it – what Zorba the Greek referred to as ‘The Full Catastrophe”, I was able to connect with the depth of struggle and suffering I’d been carrying not only the past couple of years, but during my lifetime to date of being too busy to experience the sensations in my body.

This was a lengthy process, demanding my patience, perseverance, and humility. And gradually, as the months extended over that year my foot got stronger, my mobility easier, my energy more available. But the true healing was through the expansion of my mind, spirit and heart as it united solidly with my body.

This rendered me stronger in my sense of self not in spite of, but because of having been broken by circumstance in my world.

Alchemy is the medieval chemical science and philosophy aiming to achieve the transmutation of base metals into gold. The conversion takes place in a crucible, a vessel capable of withstanding exceptional heat.

Life gives us the base metals through our ongoing vicissitudes. We are the crucible and have the capacity to endure the heat when life breaks us. The transmutation happens in body, mind, heart, and spirit – therein lies the gold.

“A person can’t eat anger for breakfast and sleep with it at night and not suffer damage to his soul” ~ Garrison Keillor
March 7, 2019
Get In Touch
Categories
Recent Posts
Go to Top